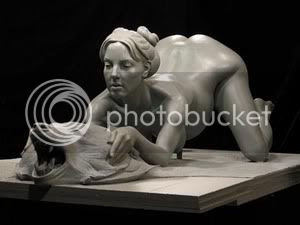 The problem is based on there : The life-size pop princess Britney Spear is naked and pregnant, crouching face-down on a bare-toothed bear rug as the baby's head appears on the opposite end made by Artist Daniel Edward and shown in Capla Kesting Gallery. When some bloggers heard about the exhibit - "Monument to Pro-Life: The Birth of Sean Preston" - the gallery was inundated with about 3,000 e-mails from around the world in just a week, split between pro-choice and pro-life opinions. They also got calls from Tokyo, England, France. Some people are upset that Britney is being used for this subject matter. "Others who are pro-life thought this was degrading to their movement. And some pro-choice people were upset that this is a pro-life monument "said gallery co-owner David Kesting. Edwards' mother was 17 when he was born, and he said his aim was to stir up debate about a difficult topic that "is greater than the issues presented by either pro-life and pro-choice advocates."

This Blog (including texts, pictures and sounds) is licensed under a Creative Commons Attribution-Noncommercial-Share Alike 3.0 Unported License. Beside CC I do not allow anyone to republish exactly as my original creation, on any kind of media, without my permission! Do more some flavor on them and turn to yours creation! If any help, reach me at lynnseck@gmail.com